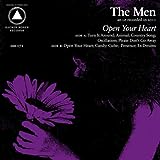 Open Your Heart album at Amazon.com
The Men's, "Church Of Logic, Sin And Love"
The Lyrics:
They weren't surprised by the wind and rain They took off any way East, I think that's what they did They were just two of the wildest, bored creatures on Earth Fed up with work, strip bars and loneliness galore In an old oldsmobilie that one of them bought off their father They ate up so much road, they were grinnin' (Then they came upon the thing)
Two hours later they decided to stop at a diner Because they loved the smell of eggs and coffee I just had to smoke a cigarette and wear a hat By the time they set off again, the Sun was starting to set It made the sky look red like a nuclear ray One of them said, "What do you want more than anything in this whole wide world? Do you want money? Do you want sex? Or do you want all that success? I thought about that myself (Then they came upon the thing)

Why:
The Men were a group from southern California that a minor national hit from their only lp, "Church Of Logic, Sin And Love" (the name of the tune as well) that was released in late 1991, and became a hit on many Rock stations in 1992. The song itself (in the first two verses that I have transcribed above) mentions the Earth (again, the planet we all live on) and the Sun. The Men never again saw any other even minor hits and broke up shortly after the song made it as a hit on several rock stations. The Men is also a misnomer name for the group, since half of the four man group was women, Nancy Hathorn on bass and Lore Wilhelm on guitar. The video of the song which became popular on VH1 and MTV, showed a road trip through Arizona and Las Vegas.
Submitted by: Peter