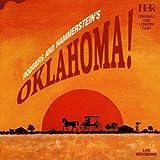 Oklahoma! (1980 London Revival Cast) album at Amazon.com
Cast of "Oklahoma!"'s, "Kansas City"
The Lyrics:
I got to Kansas City on a Frid'y By Sattidy I larned a thing or two For up to then I didn't have an idy Of whut the modren world was comin' to!
Why:
In the musical "Oklahoma!" (written and originally performed on Broadway in 1943 by Rodgers and Hammerstein), the character of Will sings this song about "Kansas City" in a chorus setting about how "Kansas City has gone about as far as they can go." (A later great and funny line in the song -- here is posted the opening verse of the tune with the town of Kansas City).
Submitted by: Peter
Cast of "Oklahoma!"'s, "Oklahoma!"
The Lyrics:
Oklahoma, where the wind comes sweeping down the plain
Why:
Oklahoma officially adopted "Oklahoma!" as its state song in 1953.
Submitted by: Kathy