There are additional 2 Live Crew Combined Groups that haven't been done yet available.

"Scandal Leads To A Jackpot"
In 1990 the controversial porno-rap group 2 Live Crew was the focus of a big scandal. Their album "As Nasty As We Want To Be" was banned outright in a Florida county. They were arrested on obscenity charges while performing at an adults-only show. Naturally the PMRC headed by the shrill superbitch Tipper Gore were flapping their big mouths and their arms like the hysterical obnoxious maniacal zealots they are. Later that year after the Constitutional issue was settled the album had made multi-platinum status. Luke and the other rappers issued a statement explicitly to Tipper thanking her for flapping her stupid yap because that brought more attention to their album resulting in it selling several million copies, making all those rappers MILLIONAIRES.
Submitted by: Popularity Makes Contempt
"Striking Down Florida's Anti-Obsenity Laws"
In 1989 2LiveCrew was hauled into court after a show in Florida because their song Oh Me So Horny was deemed obsene. The judge that aquitted the band of any wrongdoing also struck down Florida's anti-obsenity laws because music is protected under freedom of speech.
Submitted by: Celeste
"Luke Skywalker"
I'm not sure where this really fits into but here goes. We all know about the controversy of their X-rated album "As Nasty AsThey Want To Be". We also know about lead rapper's trademark dispute with Lucasfilm Ltd. about his use of the name "Luke Skyywalker" (he now uses his real name Luther Campbell or simply "Luke"). An amusing factor was added in the equation when two parents complained that their child purchased the album thinking it was a music record by "Luke Skywalker" - as in the Jedi Knight, or Mark Hamill! They took it home, played it and OMG! I laughed my butt off when I read this story in the paper. Unbelievable!
Submitted by: 1990 HA HA HA HA 2 Live Crew Is What We Are 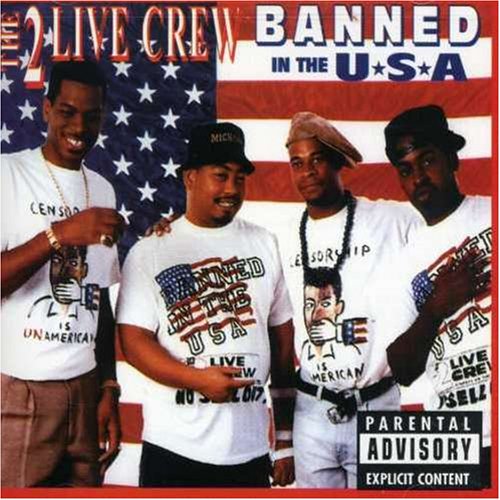 Banned in the Usa Goes to the Movies: Decade of Hits