The first image on the page is for Various Artists - Pinoy Dream Academy - Philippine Music CD, followed by the original. Also check out the most recent parody covers submitted to the site. 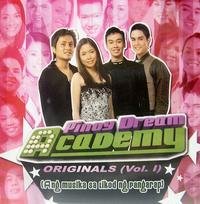 Comments: I assume that most of you guys haven't seen this CD yet, but it's from the Philippine edition of Endemol's Star Academy. I made this parody as a tribute to my parody pals Matthias (the masked guy driving) Below Average Dave (at the co-driver's seat) and Insert Coins To Continue (the one with hood and scarf. I'm the one firing the dual pistols, and sorry for those I offended in this spoof... I just made this for the fun of it, you know... Submitted by: LPG-Unit

Dylan Baranski - May 30, 2007 - Report this comment
Hey, and album for the website! 5-5-5. Only question: Why is the lowrider from the cover of GTA: San Andreas here?
Jonathan S. - May 30, 2007 - Report this comment
So the co-driver is the one I've been squabbling with, eh? That's funny. Nice inclusion of actual AmIRight parodists in the cover. On a seious note, though, I'd would like to TAKE BACK my "Bowel Beverage Dave" insult (See: poomaster's "Colon Has Opened" parody), just in case Dave visits here. Why the sudden change of heart? Because of seeing how level-headed he was on the global warming issue. (See: The "I'm A Denier" parody) Hey! The security code this time is JEW! That's funny!
LPG-Unit - May 30, 2007 - Report this comment
Yeah, thanks for the comments, guys, I'm a Filipino guy, so I thought of parodying recording artists in the Philippines. Good thing there are guys who sell such wares in Amazon...