The first image on the page is for James Bond themes - 18 James Bond Film Themes by Soho Strings (1995-11-28), followed by the original. Also check out the most recent parody covers submitted to the site. 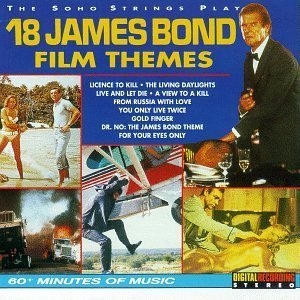 Comments: This parody gives some insight into just what a James Bong movie could look like. Submitted by: James Bong

Bong One-Liner [Middle Panel] - June 08, 2016 - Report this comment
"Here, it's your last cigarette. It won't delay your execution all that much, but by the time you get to the gallows, you won't care."
James Bong - June 12, 2016 - Report this comment
Where the heck is "Critic?" I hope "Critic" hasn't abandoned this site to go Troll elsewhere. I have to insist, "Critic" was partner in one of the most entertaining rivalalries in my artistic experience. In television terms: "Critic" was Tom to my Jerry, his Elmer J. Fudd to my Bugs Bunny, his Wile E. Coyote to my Roadrunner, his Dr. Smith to my Will Robinson, his Archie Bunker to my Michael Stivic, his Aunt Esther to my Fred Sanford, his Felix Unger to my Oscar Madison, his Frank Burns to my Hawkeye Pierce, ect., ect. I'm already missing this engaging "Bro-rivalry." Bong Voyage.