The first image on the page is for Disney - The Disney Afternoon, followed by the original. Also check out the most recent parody covers submitted to the site. 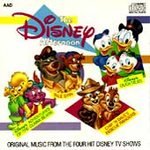 Comments: Another Kids' WB!-centric album cover parody, this one showing what an album of songs from Kids' WB! shows (particularly from the mid-to-late '90s) would look like with the cover design from the Disney Afternoon soundtrack. Submitted by: NintendoMax