What's coming on, on the TV
They're showin' some trashy, sleaze on this station
Fights go badly, no doubt
As any viewer can vouch
And yeah, you just gotta say ouch
When guests get knocked off that couch
Tell me why they put on this display for you
Biggest morons on the planet
A million viewers, I don't understand it
It never gets better
Thanks to Maury, Montel and Jerry
The original trash peddlers

The guests come down, good Lord
The wife has secret lovers all over town
She must weigh three hundred pounds
Looks like a bloodhound, but she stills sleeps around

Gettin laid is her forte
Each and every day, while her man's away
She's one ugly redneck swine (yeah)
She's spittin' when she talks half the time (oh yeah)

Trash wives with their trash lives
And their trash guys, they are no prize
Mullet and a mustache
Bet he has bad gas
No wonder she cheats on his ass
She wants to stab him
For all his disgusting habits
She says "I did your best friend," a fight starts again
Why in the world did I tune in

[Chorus (2x):]
These trashy shows are worthless
No dignity
I think I've had enough (had enough)
You can't get me to watch this
No dignity (No dignity!)
I got to turn it off (turn it off now)

Jerry makes a pile
Spreading this crap around
Letting his guests run wild
Fightin' onstage, trailer park style
Having good taste is a no
Let me tell you how it goes
Flip the bird, bleep the word
Watching this turd makes me feel like a perv

You're sufferin' from madness
If you can actually stand this
You gotta stay away
If you want some brain cells at the end of the day
These trashy shows are worthless
But you watch all day, every day
It's wastin' your time, rottin' your mind
Maybe you should go and play outside

[Chorus (2x):]
These trashy shows are worthless
No dignity
I think I've had enough (had enough)
You can't get me to watch this
No dignity (No dignity!)
I got to turn it off (oh yeah)

Hey yo hey yo what a bad show
(hey yo that show's no good)
Hey yo hey yo this is so low
(Turn off, turn off Springer)
Hey yo how low can this show go
(please change the channel)
Hey yo blame it on Geraldo

Cuz that's all sleaze and trash TV
Yeah, I'd rather just sit here and watch a blank screen
Anything good to see? Not a mother(bleep)in' thing
Guests rampaging insane, inflating all the ratings
They go free, damaging on every single thing
They're all starving for attention, it seems
Ain't you getting bored with these staged-out brawls
It's nothing new, no doubt, a charade for you, so
Please excuse if this show makes me puke
That's just me
I can't stand something low-quality
They're throwin' chairs, screamin' profanity
Watching morons sit and talk's not appealing to me
Makes me bored, sleazy shows have never been my thing
They'll never, show you anything that's worth watching
It's over now but it's on again tomorrow, 3:30
Porn stars and drag queens, there's no dignity
(No dignity, no doubt, baby)

The address of this page is: http://www.amiright.com/parody/90s/blackstreet0.shtml For help, see the examples of how to link to this page. 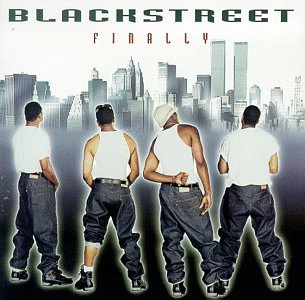