Hey this is a revision of the first parody made some minor changes that are better. Hope they can replace this one with the first.
Got out quick at about noon
Just thought I had to be in the lunch room soon
I gotta get full before the day begins
Before I start talking to my friends
About to bus and damn near went blind
Stop sign on the pad throwin up some shine
Went through my backpack and grabbed my clip
To put the mini on the side of my hip
Looked at the driver and I pointed south
Before i knew it I was at the house
Jumped into bed sipped apple juice where I lied
I then twist and turned from side to side
Then I let the Ipod play
Reminiscing from back in the day
It was summer days at the top of the list
Then I replayed the whole summer, it went something like this:
Peddlin down the street on twenty-fo's
Talking to neighbas, doin'em favas
Rode to the truck to buy a scoop
Friends out there cold shootin some hoops
A tricycle pulls up, who can it be?
A fresh lil amigo rollin trio threes
He licked his candy and he started to say
It's all about playin that GTA

Talkin on the phone to someone fine
Then see JE on the other line
I thought JE was a friend of mine
Till I caught him tryin to steal my song rhyme
Chased him up the street to try'da talk
Stupid punk picked up a rock-rock
Little did he know I had a loaded daisy
One sucker out cold, Parents thought he was lazy

Bored as hell and I wanna chat to whats her face
So I went to the computer and typed in myspace
Run by that fellow Tom who didn't make a dolla
Pulled up her page and gave her a holla
She greeted me with, "let's get rollin
And from lunch we can do some bowlin"
And from the computer I started to get ready
Before I left made sure I was steady
Went to her house to get her out of the pad
She cried out something that made me sad
She said something that I couldn't believe
Said her dog died so she didn’t wanna leave
We started talking when interrupted real rude
Reached back like a pimp and slapped the dude
She jumped up and started to shout
So just to show off I knocked his ass out.

Im rollin fast and outta control
Then chain came off and I bent the spoke
I looked at my bike and said, Oh brother
I throw it in the gutter and ask mom for another
Walkin home with no bike to ride
See dad drivin with mom on the side
They busted a U and right pulled over
To pick me up in the Yellow-Green Rover
Dad gotta cramp from sittin all day
Sat in the cubicle like a dog in a crate
And all day listenin to complaints
Hit up my dad, he'll give you the rates.

[Verse 5]
Went to bail him out but his boss was there
See the co-workers pullin there hair.
Two days later in silent park
Lil amigo's dog let out a bark
Disruption of silence, said the ranger
Stupid lil dog, but didn’t listen to strangers
Ranger came over to pick'em up
Lil amigo looked up and gave a grin
He yelled out get'em, then came tazer
The mut came in with teeth like razors
Ranger kicked the mut but didn’t hurt her
Both grounded for disobeying order

The address of this page is: http://www.amiright.com/parody/80s/eazye1.shtml For help, see the examples of how to link to this page. 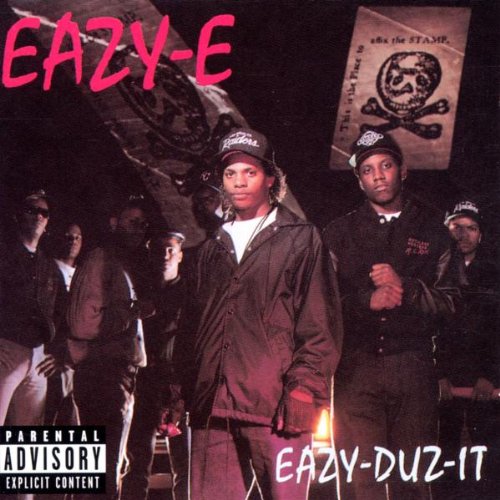