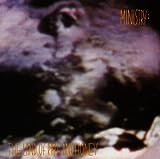 Land of Rape & Honey album at Amazon.com
Ministry's, "Bad Blood"
The Misheard Lyrics:
The eyes that vomit are the ones that are in love
The Real Lyrics:
We ask if vermin are the ones that already learned
The Story: When this video first came out, I watched it on MTV's 120 Minutes and these were the lyrics that they showed in the closed captions for the hearing impaired. I still think it sounds a lot more likely than the so-called official lyrics. - Submitted by: Sigismundo
Ministry's, "Breathe"
The Misheard Lyrics:
The raping of the lamb!
The Real Lyrics:
The raping of the land
The Story: I honestly thought these were the actual lyrics. Of course, such a depiction of barnyard perversions doesn't fit with the mostly environmental message of the song. It still sounds like "lamb" to me, and now whenever I head the line, I can't help but crack up! No sheep were harmed in the posting of these misheard lyrics. - Submitted by: Daniel
Ministry's, "Hero"
The Misheard Lyrics:
French fries! French fries!
The Real Lyrics:
Goodbye! Goodbye!
The Story: I heard this ferocious description of a battle, sung in murky speed metal vocals. At the end of each verse, it sounds just like they were yelling for French fries to the beat. Hmm, wouldn't freedom fries have been better? - Submitted by: Magnus
Ministry's, "Just One Fix"
The Misheard Lyrics:
Adjust my face
The Real Lyrics:
Just one fix
The Story: Just that a friend of mine was convinced that Ministry was saying 'adjust my face' despite all of my attempts to tell him otherwise. - Submitted by: Will