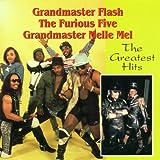 Grandmaster Flash & Furious Five - Greatest Hits album at Amazon.com
Grandmaster Flash and the Furious Five's, "The Message"
The Misheard Lyrics:
I feel like an outlaw, broke my last glass jaw
The Real Lyrics:
I feel like an outlaw, broke my last Dad's jaw
The Story: The song is about extreme poverty and the reality of life for some living in the ghetto and all the dysfunctional-ism that it entails. The correct lyric, "broke my last Dad's jaw" indicates that it is talking about a woman who has lived with many different men that her son sees as just another loser Dad in the ghetto household. This mother marries or has shacked up with many different men. The son was in a fight with his mother's most recent boyfriend; just (another) one of his mother's live-in boyfriends and broke his jaw. (He broke his last Dad's jaw) in a fight. Then the next line says, meaning the "Dad" still wants to continue fighting after the son broke his jaw. Then the next line says,

There are more Grandmaster Flash and the Furious Five misheard lyrics available.