These are lyrics by Bob & Doug McKenzie that we think are kind of funny. 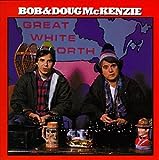 Great White North album at Amazon.com
Bob & Doug McKenzie's, "12 Days of Christmas"
The Funny Lyrics:
Bob: On the first day of Christmas, my true love gave to me, A beer. (on my tree)
Doug: On the second day of Christmas, my true love gave to me, Two turtle-necks
Bob: And a beer.
Why They're funny:
The guys go on and on, with 'three french toast', 'four pounds of back-bacon', 'five golden toques' (a Canadian winter hat), 'six packs of two-four' (a 24 case of beer), 'seven packs of smokes', 'eight comic books', then they go on to argue about where donuts fit in (and hence don't get to days nine through twelve). Quite a funny Canadian Christmas song!
Submitted by: Calop