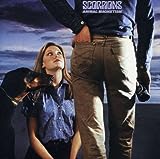 Animal Magnetism album at Amazon.com
The Scorpions', "Wind Of Change"
The dated Lyrics:
The world is closing in
Did you ever think
That we could be so close like brothers
The future's in the air
I can feel it everywhere
Blowing with the wind of change

Why They're dated:
No outright dating, though it's set in Moscow, and if any one song captured the hopes of a new era after the fall of the Berlin Wall, this is it. How long ago it feels.
Submitted by: Terry