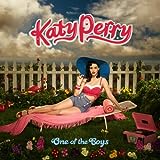 One of the Boys album at Amazon.com
Katy Perry's, "I Kissed A Girl"
The Lyrics:
I kissed a girl
and I liked it
The taste of her
cherry chapstick
I kissed a girl
just to try it
I hope my boyfriend
don't mind it
It felt so wrong
but it felt so right
It don't mean that
I'm in love tonight
I kissed a girl and
I liked it, I liked it.
Why:
Sheesh imagine if your phone went off around your boyfriend. He might think that you're a flaming homo.
Submitted by: Celeste