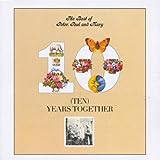 There are more Peter, Paul, And Mary misheard lyrics available.