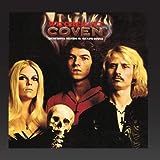 Witchcraft Destroys Minds & Reap Souls album at Amazon.com
Coven's, "One Tin Soldier (The Legend Of Billy Jack)"
The Lyrics:
Go ahead and hate your neighbor
Go ahead and cheat a friend
Do it in the name of heaven
You can justify it in the end
There won't be any trumpets blowing on the judgement day
But on the bloody morning after, ooh-ooh,
One Tin Soldier rides away.
Why:
The very upbeat tempo, "One Tin Soldier (The Legend Of Billy Jack)" was somewhat of a surprise #3 hit for the little known and not very popular three member group, Coven, back in 1971. But it deals with a very serious topic that was definitely in the minds of many people back in 1971 and still probably is today, and that would be war and many of the reasons (many times mistaken) about how it starts and continues. Coven consisted of vocalist Jinx Dawson (who really sells this song), bassist Oz Osborne (not to be confused with Ozzy Osbourne) and drummer Steve Ross. "One Tin Soldier" was originally recorded by the Canadian band, Original Caste, back in 1969 and Original Caste had a minor hit single with it in Canada. But when the movie, "Billy Jack" was filmed in late 1970, the producers were looking for a song to include as the theme of the movie, and chose Coven to remake the tune (Coven and Original Caste's version have only one minor difference -- instead of Coven's reinterpretation line, "There won't be any trumpets blowing on the judgement day.", Original Caste worded the line, "There won't be any trumpets blowing come the judgement day.") The song itself sounds like a lesson of a myth to young children, that might be taught in Sunday schools. But instead of being a myth, in many regards this is the way wars start and continue through mistakes were people are greedy and hateful and justify all in the name of heaven. The mistake in this tune that leads to war, is what the valley people think treasure is that the mountain people have buried under a rock (treasure that the mountain people's king told the valley people that the mountain people were willing to share), and that is gold. But after the valley people attack, then massacre the mountain people they are shocked to find out that under the rock is written the words, "Peace On Earth" and no gold! A very depressing thought about how people act when you think about it?
Submitted by: Peter