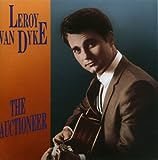 Auctioneer album at Amazon.com
Leroy Van Dyke's, "If A Woman Answers"
The dated Lyrics:
If a woman answers, hang up the phone.
Don't take a change; please don't ask for me.
If a woman answers, hang up the phone.
I love you, but darlin', I'm not free.
Why They're dated:
This song came out before the days of Caller ID. So the strategy that it calls for was thinkable then. But today, with Caller ID, it is not a ruse that could at all be expected to work!
Submitted by: Karen Smith