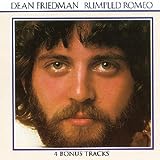 Rumpled Romeo album at Amazon.com
Dean Friedman's, "Ariel"
The dated Lyrics:
I took her home with me, we watched some TV
Annette Funicello and some guy going steady
I started fooling around with the verticle hold
We got the munchies so I made some spaghetti
We sat and we talked into the night
While channel 2 was signing off the air
Why They're dated:
Modern televisions don't allow you to mess with the vertical hold, anymore. I don't have an actual date on when they stopped being manufactured that way, but I'm sure it would be difficult to find one that still works, these days. Also, few television stations actually sign off, anymore
Submitted by: Eric Flak