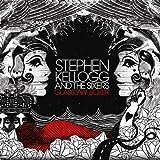 Glassjaw Boxer album at Amazon.com
Stephen Kellogg & the Sixers', "Flower in Rain"
The Lyrics:
You were sixteen and I was all wired
You were Venus di Milo inspired
You convinced me that I was ok
I convinced you that maybe you'd stay
Who They Mention:
Venus di Milo
Submitted by: Tania WYEP
Stephen Kellogg & the Sixers', "My Sweet Charade"
The Lyrics:
When you slid into the room
Everything else just disappeared
Taj Mahal sang "My Corrina"
So loud and so sincere
You were so, so sincere
Who They Mention:
Bluesman Taj Mahal
Submitted by: Tania WYEP
Stephen Kellogg & the Sixers', "Such a Way"
The Lyrics:
This woman down the street from me
She's got a this daughter 20 years
With a Sunkist smile that the winter won't go near
Her hips could shake a mountain and her lips could start a fire
And just like Nabakov, all these men walk by and as they do,
they conspire
Who They Mention:
author Vladimir Navakov
Submitted by: Tania WYEP