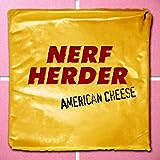 American Cheese album at Amazon.com
Nerf Herder's, "Baby Let Me Rock You"
The Lyrics:
Skin like Isabella Rosellini
...
Not like Roger Moore.
Nobody asks if I'm the singer from Bush.
'Cause I look like Pauly Shore.

Who They Mention:
Actress Isabella Rosellini, Actor Roger Moore, Actor Pauly Shore
Submitted by: RevengeFromMars YouTube
Nerf Herder's, "Come Back Down (unlisted track)"
The Lyrics:
While I'm sittin' home with I love Lucy
You were out on the town with Danny Bonaduce
...
Celebrities-they come and they go
One day you're Carry Grant
And the next you're Scott Baio