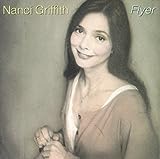 Flyer album at Amazon.com
Nanci Griffith's, "Drive-in Movies and Dashboard Lights"
The Lyrics:
She played a Silvertone from Montgomery Ward
Baez songs in Monroe hair
She sure could turn the boys' heads to stare
Who They Mention:
Joan Baez,
Marilyn Monroe
Submitted by: Tania WYEP
Nanci Griffith's, "It's a Hard Life Wherever You Go"
The Lyrics:
I was a child in the sixties
dreams could be held through TV
With Disney, and Cronkite, and Martin Luther
Oh, I believed, I believed...I BELIEVED
Who They Mention:
Walt Disney
Walter Cronkite
Martin Luther King
Submitted by: Tania WYEP
Nanci Griffith's, "Listen to the Radio"
The Lyrics:
Loretta Lynn guides my hands through the radio
Where would I be in times like these
without the songs Loretta wrote?
...
I smell the Pontchatrain, I hear Silver Wings
then, away Merle Haggard flies
Who They Mention:
Loretta Lynn
Merle Haggard
Submitted by: Tania WYEP