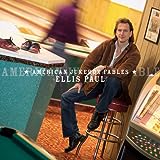 American Jukebox Fables album at Amazon.com
Ellis Paul's, "Bad, Bad Blood"
The Lyrics:
It's Parker in disguise
with a loaded forty-five
he's wearing a mask of Ronald Reagan
Who They Mention:
Ronald Reagan
Submitted by: Tania WYEP
Ellis Paul's, "Blacktop Train"
The Lyrics:
The wheels came spinning
with the wide-eyed crusaders
out on a quest for the trail
of Jack Kerouac
....
Musicians pull over
looking over their shoulders
at Hank Williams, Buddy Holly
lighting the flame
Who They Mention:
Jack Kerouac
Hank Williams and Buddy Holly
Submitted by: Tania WYEP
Ellis Paul's, "Goodbye Hollywood"
The Lyrics:
I've seen you walk like Charlie Chaplin
I've seen you cry like Natalie Wood