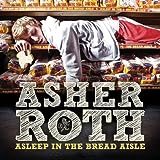 Asleep in the Bread Aisle album at Amazon.com
Asher Roth's, "As I Em"
The Lyrics:
Em was great, yeah he paved the way for me.
He was inspiration for everybody from A to Z.
Who They Mention:
Eminem, rapper whom Roth is often compared to.
Submitted by: Paige
Asher Roth's, "Rik Smits"
The Lyrics:
All of ya’ll that who thought that I was soft
And didn’t know that the jaw was Bradshaw
Who They Mention:
Hall of Fame quarterback Terry Bradshaw
Submitted by: JeReMy
Asher Roth's, "Rik Smits"
The Lyrics:
More like Rik spits spin without using a backboard
Nick Swish, flip switch, when I get into rap form
Who They Mention:
Former NBA player Rik Smits (who is also named in the song title) and MLB outfield Nick Swisher, formerly of the Oakland Athletics, New York Yankees, Chicago White Sox, and currently (as of March 5, 2013 when this was submitted) with the Cleveland Indians.
Submitted by: JeReMy