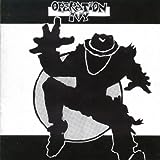 Operation Ivy album at Amazon.com
Operation Ivy's, "Artifical Life"
The Misheard Lyrics:
Ours is the life in the market place
The Real Lyrics:
Artificial life in the market place
The Story: My brother lent me an Operation Ivy CD which I played in my car for about a year....then I started to question some of what I thought the lyrics were. I wondered why they would be saying that they loved the life in the market place. - Submitted by: Me
Operation Ivy's, "Take Warning"
The Misheard Lyrics:
Ted Gordon, Ted Gordon
The Real Lyrics:
Take Warning, Take Warning
The Story: I actually didn't mishear it this way, though Jesse's singing can occasionally be indecipherable (though he's a lyrical genius). Credit for this one goes to an ex of mine who used to see opiv all the time, but only had the album as a dubbed tape. For years, she thought those were the lyrics. Of course, this is the same girl who was once driving down the road with friends in her pink Bug, saw another pink car and said, 'I wish I had a pink car...' so do with this what you will... - Submitted by: Dave Johnson