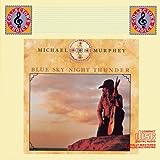 Blue Sky Night Thunder album at Amazon.com
Michael Martin Murphey's, "Wildfire"
The Misheard Lyrics:
Shemp called him Wildfire
The Real Lyrics:
She ran calling Wildfire
The Story: I've tried to find the Three Stooges clip in which Shemp calls something or someone "Wildfire," but I've yet to find it. Obviously, Michael Martin Murphy has sure heard him call something or someone "Wildfire" because he wrote the song about it. However, Epic, his record company at the time, made him change the lyrics from "Shemp called him Wildfire" to "She ran calling Wildfire' because it would have just sounded stupid for one of their artists to sing about what one of the Three Stooges called a horse. Still, MMM slips it in there once on the studio recording and live, he would clearly belt out; Shemp called him wi-i-i-i-i-i-ld fi-i-e-er! - Submitted by: Chuck