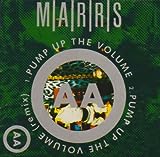 Pump Up the Volume / Anitina album at Amazon.com
M/A/R/R/S's, "Pump Up The Volume"
The Misheard Lyrics:
Rythmatic, systematic, birth control
The Real Lyrics:
Rhythmatic, systematic, world control
The Story: These were misheard by my mother in her 'your music promotes bad values' mood. Suddenly she started going 'well, this band are alright. They were singing about birth control.' To cut a long story short, it's now very hard to take this song seriously. - Submitted by: Haz-Man
M/A/R/R/S's, "Pump Up The Volume"
The Misheard Lyrics:
They're not misheard. There were multiple versions of the song.
The Real Lyrics:
Rythmic, systemic and world control Magnetic, genetic, dement your soul.
The Story: There were several different versions of "Pump Up the Volume". The original 1987, UK release did contain, "Automatic, pushbutton remote control, synthetic, genetic commands your soul", which is a sample from the song "Mean Machine" by "The Last Poets". Later versions contained the ...magnetic, genetic.... lyrics. I don't know where the later sample came from. - Submitted by: Doug
M/A/R/R/S's, "Pump Up the Volume"
The Misheard Lyrics:
better than Sisqo
The Real Lyrics:
brothers and sisters
The Story: Many of the samples used to make the song are distorted or hard to understand at first. - Submitted by: jim mij