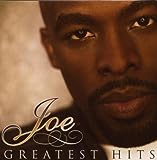 Greatest Hits album at Amazon.com
Joe's, "I Wanna Know"
The Misheard Lyrics:
Baby, anything you say, Now 2
The Real Lyrics:
Baby, anything you say, I'll do
The Story: I thought at first he was saying Now 2, as in the Now That's What I Call Music! series in the US. - Submitted by: Cody Finke
Joe's, "Stutter"
The Misheard Lyrics:
I can tell you're lying, because when you were crying
Stutter, stutters, stutter, stutters.
The Real Lyrics:
I can tell you're lying, because when you you're replying
Stutter, stutters, stutter, stutters.
The Story: I always thought these were the lyrics to this song for years. - Submitted by: Natasha
Joe's, "Stutter"
The Misheard Lyrics:
I smell cologne, damage zone.
The Real Lyrics:
I smell cologne, damn it's strong.
The Story: I have been mishearing this part for months. I thought Joe was saying 'damage zone' to let the woman who cheated on him know that she caused too much damage with her lying. I looked up the lyrics on the internet and begin to crack up as I compared my interpretation with the actual lyrics! - Submitted by: A.D.G.