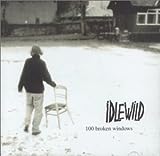 100 Broken Windows album at Amazon.com
Idlewild's, "Rusty"
The Misheard Lyrics:
Dippy The Dog knows you're not original.
The Real Lyrics:
You definitely don't know you're not original.
The Story: There I was, listening away to what seemed a credible album overall...and then this line came up and made me shout 'what the..!?' with incredulity. Who on Earth is 'Dippy The Dog'? And from the sounds of things, he sounded very presumptuous. It was only when I saw the lyrics one day a while later I realised...and for the rest of that day I couldn't stop laughing. - Submitted by: Devil Jones
Idlewild's, "You Don't Have The Heart"
The Misheard Lyrics:
Tin-Tin Out! (Shut up!)
The Real Lyrics:
Sit up! (Shut up!)
The Story: This was heard during a time when monotonous Tin-Tin Out were inexplicably popular and because of this. I was horrified at the notion that they managed somehow to infiltrate the lyrics of a credible band. Obviously I was sceptical to it all, so later on I laughed inwardly after seeing the real lyrics online. - Submitted by: Devil Jones