The first image on the page is for James Bond - OST - Tomorrow Never Dies: Music From The Motion Picture by Sheryl Crow, K.D. Lang, Moby Soundtrack edition (1997) Audio CD, followed by the original. Also check out the most recent parody covers submitted to the site. 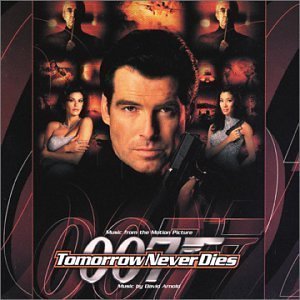 Critic - January 06, 2016 - Report this comment
Insane pot themed bin liner material.
Uh Oh... - January 06, 2016 - Report this comment
The Queen of the Hissy Fits is back again!
Critic - January 07, 2016 - Report this comment
From my point of view the three non-commenting auto-fivers are frauds or just plain dumb. Not unlike the stoners that find such drug laced themes outstanding. Pot is a gateway drug no matter what medicinal benefits. I know too many people that started with pot and moved up to heroin and are in prison. Is trading desserts and smokes for not getting raped fun? Begging for family to send money, stamps, writing paper, and crying on the phone? Wise up wise azz. Drug use isn't really all that funny. Most of the people that bought many houses in suburban neighborhoods to grow hundreds of plants under armed guard also got caught and are in prison. Is that the glorious lifestyle you promote? James Bong in real life is a loser.
Ernst Stavros - January 07, 2016 - Report this comment
Critic, you really are a riot, except your confessional about prison life. But really, "Wize up?" Go preach to Cheech Marin and Tommy Chong that "drug use isn't really all that funny." What's shown on the TV screens in this parody, seems just a sampler of how accepted and pervasive pot humor is in entertainment. Anyway, why so serious? The reason I visit this site is to see parody. Bong seems a good example. As for those chronic pot smokers - who else is going to pump our gas?
Kent A. Bliss - January 07, 2016 - Report this comment
Don't call James Bong a loser, Critic. He's a well-respected non-productive part of society!
Outraged - January 07, 2016 - Report this comment
I am Outraged. This whole page must be rigged; the "hissy fit" comment proceeds that long-winded hissy fit. Something fishy here.
Critic - January 15, 2016 - Report this comment
Remind me again about how Cheech & Chong were A-list Hollywood celebs... Oh yeah, they weren't!!! Problem with stoners is that fantasy land is their sad unemployed reality.
Porfle Popnecker - January 15, 2016 - Report this comment
Very good job!
ErnstStavros - January 31, 2016 - Report this comment
Critic, if you had made the fortune Cheech and Chong made, you could afford to move into a mansion, instead of occupying in your parents basement hating anyone who is having more fun than you (A long list to be sure). As for A-list Hollywood celebs who love pot & don't care who knows it: George Clooney, Matt Damon, Johnny Depp - the list goes on. Justin Timberlake told Playboy the he "loved smoking pot." He also admitted that he thinks some people "are just better high." As for the list of beautiful Hollywood gals who love pot: Natalie Portman, Kirsten Dunst, Cameron Diaz, Jennifer Aniston, Jennifer Lawrence, Chalize Theron Kristen Stewart, Miley Cyrus and many, many more. You cannot argue that these pot fanciers are not successful. So much for your lame, outdated pothead stereotypes.
GOP Records - January 31, 2016 - Report this comment
...yup, yup, and for all you pot hating neo-conservatives, you can add to your list of pot users: Sarah Palin, Rush Limbaugh (who says "it's the only way he can get through all (those) shows.", And who can forget, former "leader of the free world" George W. Bush. Also, conservative media celebrity Bill O'Reilly doesn't miss a beat insiting that "marijuana SHOULD be legalized."