The first image on the page is for Grup Sema - Allah'in Dostudur Hazreti Ibrahim, followed by the original. Also check out the most recent parody covers submitted to the site. 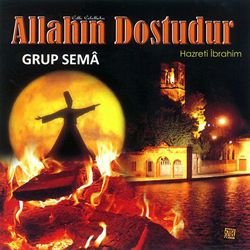 Comments: Something not widely known outside the Middle East is that Islam has its own form of sorcery something like a counterpart to the Jewish Kabballah. I don't think it has ever pulled off any pyrotechnics as impressive as the ones on this cover, however. Submitted by: Honest Covers