Jokes about Ke$ha from the largest music humor site on the web. Check out the index for other performers we have jokes about. 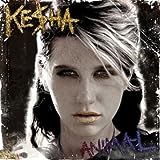 My ex-girlfriend told me she's really excited about the release of Ke$ha's new album. She was my girlfriend ten minutes ago!!!

Q: Have you heard about Ke$ha's toothpaste commercial? A: 5 out of 5 dentists DON'T recommend that you brush your teeth with Jack!!!

Q: What is Ke$ha's favorite Lady GaGa song? A: Glitter and Grease!

Q: What is Ke$ha's favorite movie? A: "Glitter" with Mariah Carey!

Q: What was Ke$ha arrested for? A: Drugs. She was going with the flow of the Blow!

Q: Why does Ke$ha stay the same? A: She doesn't like to make change! (a cashier's joke)

Q: Why was Ke$ha so upset? A: She finally learned that not everything that glitters is gold!